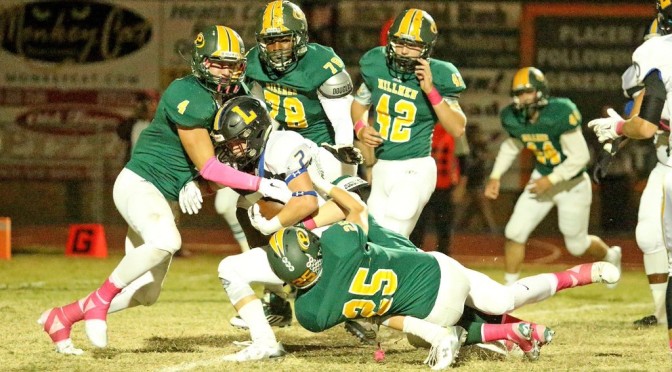 Owen Scott had 300 yards of total offense and five touchdowns, and the defense shut down Lincoln’s potent offense as the Hillmen routed Lincoln 49-7 to clinch their fourth straight PVL title.  It took Scott just under three minutes into the first quarter to find the end zone, as he scampered  for a 16 yard touchdown run to kick off his big night. He then scored from 11 yards out near the end of the first quarter, and added a two-point conversion to put the Hillmen ahead to stay 14-7. Fullback Jared Halbert continued his impressive season, scoring on a 53 yard touchdown run to increase the lead to 21-7. Scott scored from one yard out for his third touchdown of the night.  Following a 53 yard touchdown pass to Derek Haney, Ante connected with Scott for an 82 yard touchdown pass to put Placer in front 42-7.  Scott scored on a 57 yard touchdown run early in the third quarter to close out the scoring. He finished with 204 yards rushing and 96 yards receiving. Defensively, the Hillmen held a Zebra offense that had been averaging 53 points per game in the PVL to just seven points. Placer forced four turnovers on the night. Taylor Levesque picked off Elijah Garcia twice, and Joe Robinson also added an interception. Chris Mcdonell forced a fumble, which was recovered by Michael Downen. The Hillmen starting defense has allowed just 41 points in four league games so far this season, tops in the PVL. The Hillmen will close out the regular season Friday at home against rival Colfax at 7:30pm. To read more about Friday’s PVL clinching victory, check out Ike Dobson’s story in the Auburn Journal. Also Friday night, the JV (7-2, 4-0) shut out Lincoln 19-0 to clinch a share of the PVL title. If they beat Colfax this Friday night, they will clinch their second straight outright PVL championship. The game will kick off at 5:15 pm. The Freshman routed Lincoln 48-12 to improve to keep their undefeated 9-0 record in tact. They will also face off against Colfax (8-1, 4-0) for the PVL championship Thursday at 5:30pm.