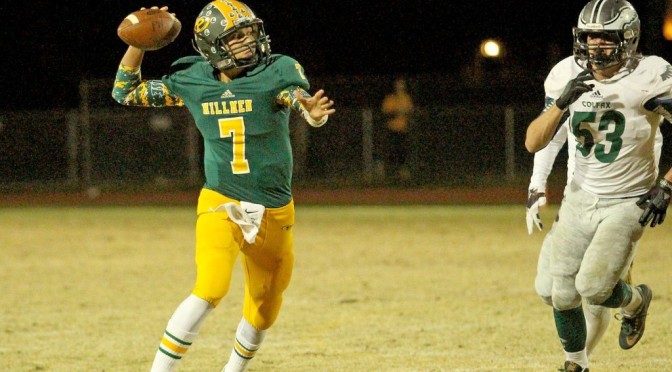 After capping off an undefeated regular season last Friday night against Colfax, the Hillmen (10-0) are primed and ready to begin their playoff run tonight in the opening round of the Division III playoffs against River Valley (8-2). The Hillmen with be getting several key starters back. Linebacker Brian Stangland who has been out since week three, running back Waylen Cozad, and center Jack Petty.  One of the biggest keys to the game will be the battle in the trenches. Placer has been dominant up front on both sides of the ball this season. Jacob Capra, Diego Lopez, Jack Petty, Logan Moore,  Tyler Mader, and Alex Houston will look to neutralize a strong River Valley front four on defense.  On defense, Michael Downen, Simeon Engle, Logan Crawford, Capra, and Lopez have consistently pressured opposing quarterbacks all year and will be looking to do the same against River City’s Avery Gould. Offensively, running backs Owen Scott and Jared Halbert will look to continue their recent run of success on the ground, and figure to get a boost with the return of Cozad, who was also having an impressive season prior to his injury. Tight end Derek Haney has also been impressive of late, and quarterback Marcus Ante has turned in solid performances in recent weeks. River City is led offensively by running backs Dante Love, Clarence Pierson, wide receiver JoJo Penn, and Gould. It promises to be an exciting night of football. Kickoff is set for 7 pm. Come out and support your Hillmen!  If you can’t make it out to the game, tune in to KAHI 950 to hear all the action. Follow us on Twitter for live in-game scoring updates!