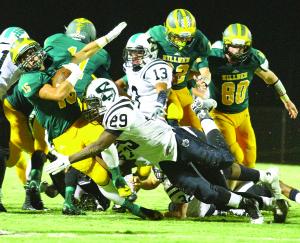 After scoring on every possession last week, Placer (2-1) returned to the friendly confines of  LeFebvre Stadium Friday night and continued to light up the scoreboard The Hillmen scored the first five times they touched the ball offensively, thumping Sheldon (1-2) 49-13 to capture their first home victory of the 2014 season.

Following an interception by safety Marcus Ante, RB Cole Blackwell got the offensive barrage rolling, with the first of his two touchdowns on the night, barreling into the end zone for a two-yard touchdown run to put Placer in front 7-0.

One minute into the 2nd quarter, the Hillmen found the end zone again as Clark Pietromonaco hit TE Tyler Gums in the corner of the end zone for an 18-yard touchdown.

Blackwell found pay dirt again from one-yard out to increase the lead to 21-0.

Placer struck for two more quick scores before the half.  RB Anthony Pierce scampered into the end zone for a 6-yard touchdown, and Pietromonaco threw an 11-yard touchdown pass to RB Austin Hess to give the Hillmen a commanding 35-0 halftime lead. Hess also added a 17-yard touchdown run midway through the third quarter.

Defensively, Placer’s starting defense turned in another dominating performance against the Huskies, limiting them to just 105 total yards in the first half before emptying the bench in the second half.  Michael Downen (9 tackles 1 TFL .5 Sack) led the charge up front for the Hillmen Zack Madrigal also had an interception, and Brian Stangland, Taylor Levesque, and Owen Scott each delivered big hits for the Placer. Since their opening night loss to Nevada Union, the defense has given up next to nothing, allowing just 13 points in the last eight quarters. Check out the Auburn Journal for video interviews from Pierce, Ante, and head coach Joey Montoya.

Placer will travel to Del Campo High School to take on Rio Americano next Friday (9/19) at 7:30 pm. 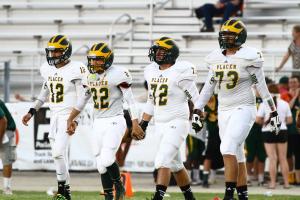 Fresh off a convincing 55-0 victory last Friday night against Pioneer, the Hillmen (1-1) will look to continue to build momentum tonight at home against Sheldon (1-1).  Following their strong performance last week, Placer’s defense faces another stiff challenge, as the Huskies have a lot of speed on the offensive side of the ball. Offensively,  the backfield figures to get a boost with the return of running back Austin Hess, who missed last week’s game due to injury.  Kickoff is set for 7:30pm.  If you can’t make it to the game, tune in to 950AM KAHI to hear all the action! You can also follow us for live in-game scoring updates on Twitter! Click on the link below to read tonight’s game preview in the Auburn Journal.