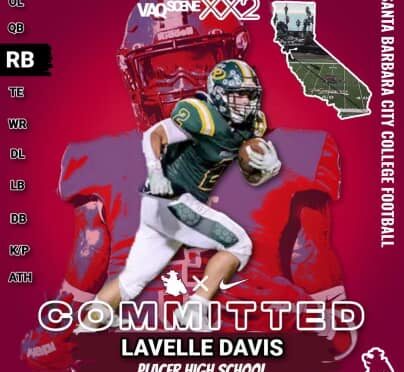 With an additional congratulations to Lavelle Davis for signing to play at Santa Barbra Junior college.

Read more about it from the Auburn Journal below- 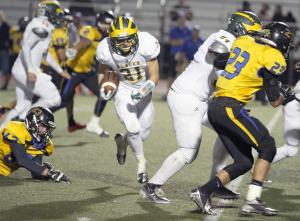 Heading into last week’s showdown it was Colfax’s Tim Rawlins who received all the hype, but on Friday night,  Hillmen Running back Owen Scott put on a show of his own.  Scott ran over the Falcons defense all night long, rushing for 173 yards and one touchdown, earning him Athlete of the Week honors.  Scott, who outrushed Rawlins on the night,  had several runs where he carried 3-4 defenders downfield with him.  After battling injuries early in the season, the junior came on strong in league play giving the Hillmen another dangerous offensive weapon in their offensive attack. So far this season, Scott has 502 rushing yards and four touchdowns on the ground, and 226 yards receiving and one receiving touchdown. Check out today’s Auburn Journal for more on Scott and his performance! 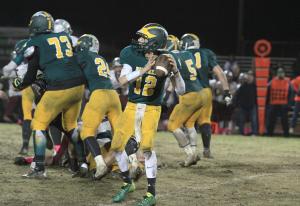 On Saturday night against league rival Bear River, Placer QB Clark Pietromonaco turned in his best overall game of the season. The senior threw for 205 yards and 2 TDs, and he also rushed for a team leading 72 yards, including an impressive 49 yard touchdown run.  With his impressive performance, Pietromonaco nabbed Auburn Journal Male Athlete of the week honors for the Hillmen.  So far this season Pietromonaco has thrown for 1028 yards and 9 TD in 7 games, and is a big reason why the Hillmen are in prime position to capture their third straight PVL championship. To read more about it check out today’s story in the Auburn Journal!

Following his performance last Friday night against Foothill which saw him do a little bit of everything, including a stripped fumble 19 yard scoop and score, a 63 yard TD reception, and a blocked PAT on special teams, Frankie O’neal was named the Auburn Journal Male Athlete of the Week for the Hillmen. O’neal grabbed four passes for 130 yards last week. In the past two games he has really come on strong, with 9 catches for 312 yards and 3 TDs. Read more about it in today’s Auburn Journal!

Auburn Journal Male Athlete of the Week: Placer senior Frankie O’neal contributing all over the place 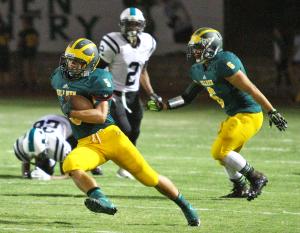 One week after sitting out due to a hamstring injury RB Austin Hess returned to the field last Friday night and played a key role in Placer’s 49-13 victory. Hess earned Auburn Journal Player of the Week honors for the Hillmen, gaining 89 yards on eight carries and 49 yards receiving on three catches.   He also scored on an 11-yard touchdown run just before halftime, and quarterback Clark Pietromonaco connected with him for a 17 yard touchdown pass in third quarter. Read more about it in today’s Auburn Journal!