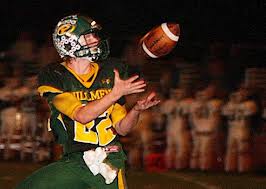 To say that 2009 was a year to remember would be an understatement.  The Placer Hillmen exemplified the meaning of the word “team.” They were a close knit group, a true band of brothers. Couple that with the fact that they had an immense amount of talent and it is easy to see why they were so successful. Placer went 12-2 that year,  including routes of Bear River (51-7) in week 7, Foothill (57-20), and  Calaveras (43-23 in the playoffs. Placer won a pair of thrillers beating Casa Roble (31-30) in week 3,  and downing Sonora (15-14) in the section semifinal game on a halfback touchdown pass from Dalton Dyer to Cameron Southward on fourth down, followed by a two-point conversion from Asher Gotzmer. That squad also beat arch rivals Colfax (34-27) and Whitney (28-19), en rout to the school’s second consecutive section title game appearance. That year, Placer was loaded with offensive weapons. Gotzmer (1735 yds rushing, 907 yds receiving, and 34 total touchdowns) and Josh Turney (1121 yds rushing and 21 touchdowns), led a potent ground attack which ran wild on opponents all season long. The Hillmen weren’t too shabby through the air either.  QB Colin Burnett (18 touchdowns, 2151 yards passing),  and WR Cameron Southward (793 yards receiving, 8 touchdowns) turned in stellar seasons for the well rounded offensive attack. The Defense was anchored by LB Josh Klem (107 tackles), DE Mike Gray (100 tackles, 5 sacks), and DE Jarrad Weaver (5 sacks). LB Brett Lenz (96 tackles) and Caleb Mitchell (77 tackles) were also vital cogs on the defensive side of the ball.

Click here to see stat leaders from the 2009 season