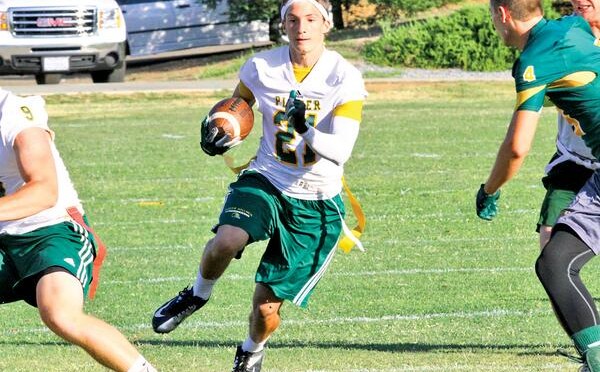 Marcus Ante connected with running back Owen Scott for a 60-yard scoring strike and also scored the game winning 2-point conversion on keeper to rally his team back from a 14-0 first half deficit for the victory.

Ante’s successful conversion was set up thanks to a touchdown run by fullback Brian Stangland late in the fourth quarter to tie the score 14-14.

Green team team running back Austin Hess ran for two first half scores to stake his team to a 14-0 lead.  Green was poised to go up 21-0 in the third quarter, but Johnny Capra stripped the ball from Clark Pietromonaco’s hand on a fourth-and-goal.

Capra and Michael Downen, who recorded multiple sacks, led a stifling Gold team defense in the second half. Pietromonaco had two defensive interceptions for the Green squad.

(Photo courtesy of the Auburn Journal)